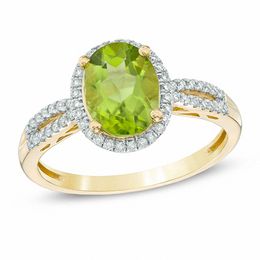 It is sometimes called the evening emerald for its light green color.

It was once believed that the green peridot crystals found in volcanic ashes were the tears of the volcano goddess, Pele.

Peridot has been found in volcanic lava in Hawaii and in meteorites that have fallen to Earth.

In the 1700s, a meteorite that landed in Siberia contained many peridot crystals that were large enough to be used for jewelry.

When set in gold, this gem was said to protect the wearer from nightmares.

Peridot is believed to help depression. If you dream that you find a peridot while digging in the garden, you will have an unexpected visitor.

Peridot is a rare gemstone that only occurs naturally in one color. It is a form of Olivine (think olive green), a mineral composed of magnesium and iron. With the inclusion of outside elements, certain gemstones can occur in every color of the rainbow. The August birthstone, however, only comes in subtle shades of green. It will never be blue, red, purple, orange, or anything else! It is unique in its specificity.

All peridots came to exist on Earth in one of two ways: they either formed deep underground at high temperatures or caught a ride on flaming meteorites (called pallasite meteorites). Peridot from asteroids is extremely rare and valuable, but lucky for us, the United States has a steady supply of peridots made underground. Brilliant Earth sources our stunning peridots from the San Carlos Reservation in Arizona, where Native American community members revere the land and use low-impact mining techniques. These gemstones provide Native Americans with safe, secure livelihoods in an otherwise isolated area.

Peridots have been steeped in myth for thousands of years. Pliny the Elder (23-79 AD), an ancient naturalist, first recorded the existence of peridot on a small island off the coast of Egypt. He originally called the stone “topazios” and described it as a gem that was commonly green but also occurred with yellowish tones. He named that island Topazios, after the gem, but it was later renamed St. John’s Island or Zabargad. This island was closely guarded by the ancient Egyptians because it was thought to be the site of priceless treasures. It is widely believed that some of Cleopatra’s famous emeralds were actually peridots!

The Egyptians called peridot the “gem of the sun,” and some thought that it protected against nightmares. It was also believed to bring the wearer confidence, power, and general good luck and health. Peridots are also closely connected to the Hawaiian culture—they are thought to be the tears of the volcano goddess Pele. The sand on the Big Island’s Papakolea Beach is a rare and beautiful green hue due to a high content of crushed olivine.

Peridot ranges in color from yellowish lime green to deep, earthy olive tones, making them a very sought after jewelry choice. These gemstones are a wonderful option for those who love green gemstones but are looking for an option at a lower price point than emeralds. Certain shades of peridot can easily be confused with emeralds! When set against lustrous sterling silver, peridots can show off their fresh, vibrant sparkle.

If you are looking for a piece of unique jewelry for someone born in August (even if that’s you!) consider our Silver Peridot Twist Pendant or our Silver Peridot Stud Earrings.  One famous fan of peridot earrings is the Duchess of Cambridge, or Princess Kate, who has frequently been seen in a pair of peridot, blue topaz, and diamond earrings.

Vintage peridot jewelry is frequently found from the Victorian, Edwardian, and Art Nouveau eras. King Edward VII (for whom the Edwardian era is named) declared it his favorite gemstone, which made it a popular choice for his subjects. Art Nouveau era jewelers favored colorful, semi-precious stones such as peridot.

Peridot is durable enough for everyday wear in jewelry, but should be treated with care to avoid scratching. Clean your peridot with mild soap and warm water.

Sign up to receive exclusive member updates, specials, product education, and much much more!